But savvy investors are also wise to the fact that where other expats have settled, there is likely to be a better chance of relocating smoothly and fitting into the lifestyle, as well as snapping up property that could serve as rental generators.

For those that like to research locations of properties and where most foreign residents are located, we take at look the recently released statistics for the Ministry of Interior Directorate General of Migration Management

It is no surprise that the big cities of Istanbul, Ankara, Izmir, Antalya and Bursa have foreign national hubs. Istanbul because it is the main city that attracts working and studying foreigners compared to the likes of Antalya, which is the main tourism driver for the country.

Izmir is regarded as the most Westernised city in Turkey, given its location, and so foreigners are always pulled to this lovely city for its laidback culture, sunny resorts and foreign-friendly outlook. 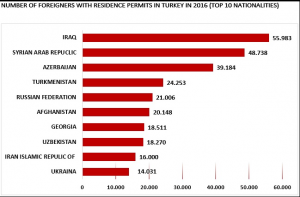 And despite Turkey’s current predicaments with politics, Syria and terror attacks, the statistics have surprisingly shown a continuing rise in the number of people seeking short-term residence permits to stay permanently.

Potential foreign investors will see that the top five of foreigners with residence permits are not from the European states. No, instead, Iraq, Syria Azerbaijan, Turkmenistan and Russia, are followed by Afghanistan, Georgia, Uzbekistan, Iran and Ukraine. 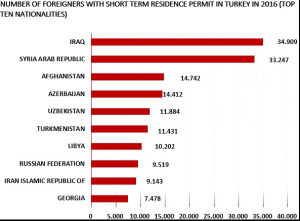 The majority of Europeans will be scattered across the Turkish coastline from Izmir to Antalya, and within the Istanbul and Izmir conurbations, whether through work or retirement.

Equally those with the most short-term work permits range from Georgia withy 8,000 in first place to Ukraine in fifth with 2,476 permits, and through Uzbekistan, India, Moldova, Azerbaijan and Iran.

Interestingly, the top five buyers in 2016 were from Iraq, Saudi Arabia, Kuwait, Russia and Afghanistan.

The lure of property buyers from the Middle East is quite intriguing as it appears they do not even feature in the op 10 holders of residence permits. It hammers home the message that Saudis and Kuwaitis view Turkey as a prime investment location.

The lure of property buyers from the Middle East is quite intriguing as it appears they do not even feature in the top 10 holders of residence permits. It hammers home the message that Saudis and Kuwaitis view Turkey as a prime investment location.

All these stats demonstrate the cross-cultural divide that Turkey now hosts. Encouragingly, this offers the chance for property investors to get well-researched locations to help narrow their choice before a decision can be made on property.